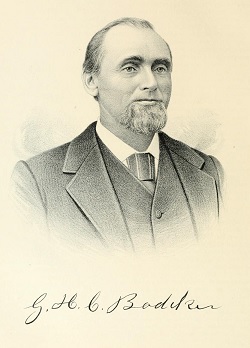 HON. G. H. C. BODEKER is the Mayor of Murphysboro. This history would be incomplete without his sketch, for in social, political and business circles he occupies a very prominent and influential position. He is a wholesale and retail dealer in ice, is agent for the Excelsior Brewing Company of .St. Louis, and is a stockholder, Treasurer and Director in the Big Muddy Coal and Coke Company of De Soto, Ill. Through the legitimate channels of business he has won success and gained a comfortable competence. Mr. Bodeker was born in St. Louis, Mo., near where Forest Park is now situated, July 3, 1843. His father, John Bodeker, was born in Germany and there engaged in merchandising. Coming to America, he carried on a boarding house near St. Louis, and opened a coal mine near Shaw's Garden. In 1873, he came to Murphysboro, where he lived retired until his death, at the age of seventy-six. He wedded Marguerita R. Teuken, a native of Germany, and they became the parents of three sons and three daughters, who grew to manhood and womanhood. The paternal grandfather of our subject was quite wealthy, and owned a line of steamers plying between Germany and Austria.

At a very early age, Mr. Bodeker of this sketch began earning his own livelihood, and worked at coal mining for some years. In 1861 he enlisted in Company B, Fifteenth Missouri Militia of Coal Miners, but after thirty days the company was honorably discharged, for the gun-boats could not move on account of needing coal. In 1862, our subject located in Belleville, St. Clair County, Ill., where he worked for three years, and then leased and opened up a mine at Fruitland, Calhoun County. In the fall of 1868 he went to Alma, and in January, 1869, came to Murphysboro.

For a very short time Mr. Bodeker worked in the mines, and then aided in the organization of the Miners' Union, of which he was Treasurer, but during the strike of 1870, he severed his connection with it and embarked in the ice business. Not long afterward he became agent for the brewing company. His trade in ice gradually increased, and he is now doing a large wholesale and retail business. In the southern part of the city he owns forty acres of land, including Bodeker's Lake, where he has three ice houses, 100x40, 30x40 and 40x60 feet respectively. He has steam power and an elevator, and an endless chain, and for convenience in shipping has built a switch track from the Mobile & Ohio Railroad. In 1880 he bought and opened mines at De Soto, which are now owned by a stock company, of which he is Treasurer. They have two hundred acres of coal land, and employment is furnished to one hundred and fifteen men. In addition to the interests above mentioned he owns a handsome residence and Bodeker's Hall, besides other valuable property.

In 1869 Mr. Bodeker was married to Margaret Wilson, a native of Chester, Ill., and a daughter of George Wilson, who was born in Scotland. In early life the father was a shoemaker, but after coming to this country engaged in mining, and operated the Dorchester Mine at Mt. Carbon until his death. His wife, who bore the maiden name of Jane Wallace, was also born in Scotland. Mr. and Mrs. Bodeker have a family of five children: Henry, Charles, Martha, Nellie and Nora.

Mr. Bodeker takes a very prominent part in local politics, and is a stalwart advocate of the principles of the Republican party. In 1871 he was elected Alderman, and from 1876 until 1880 again filled that office. In 1883 he was once more elected to that position, which he then filled until 1889. His frequent re-election to that office indicates his fidelity to duty, his popularity and the confidence reposed in him. In April, 1893, he was elected Mayor on the Republican ticket and is now acceptably filling the position. Socially he is identified with the Independent Order of Odd Fellows, the Ancient Order of United Workmen and the Knights of Honor.

Mr. Bodeker is also the owner of forty acres, half of which is laid out as a park. In 1890 he built a dam and made an artificial lake covering six acres, which is well stocked with fish, and thus boating and fishing are supplied. He has also been instrumental in organizing and establishing various other enterprises of the city, and has ever borne a prominent part in those interests which are calculated to prove of public benefit. He is indeed a valued citizen and one worthy the high regard in which he is held.