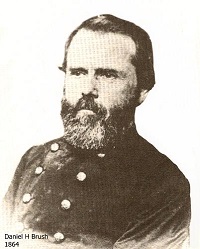 Every town or city of consequence which is not the sudden and recent product of trade conditions venerates the memory of some sterling, though it may be rugged, founder who, anticipating the tide of immigration which has flowed from the Atlantic seaboard steadily toward the sunset until it has overspread the whole country, planted his foot in the wilderness and there hewed out for himself a new home wherein his hopes might expand and flourish. These were men of heroic mold, fashioned by their time for sturdy work fit progenitors of the people they begot. No toil deterred, no danger daunted, no hardship dismayed them. With unyielding will they pressed their way over every obstacle, often challenging Fate herself into the lists, and meeting her on almost equal terms.

The dreams that impelled them to and sustained them in their perilous undertakings we may not know, for they have left no record of them. Perhaps they were inspired only by hope of immediate gain, and saw no farther. It may be that some of them sought naught but relief from the irksome restraints of society in the wild life of the forest. Yet men of either of these classes must have awakened to wider vision in their close communion with Nature, and come to see themselves, as many others must have seen them, the planters of new communities, the patriarchs of people, to pass away in their time but to be revered ever afterward, and, remote from the period when their wasted tenements were laid to rest, to be kept standing in the gaze of posterity, heroic figures, dimly glorious, far up the valley of years. To this class belongs General Daniel H. Brush, the founder of Carbondale. He had both the lessons of the past and the impressive events of what was the present to him to give him hints of what might happen anywhere in this country. But he had also a wide sweep of vision and foresight, and it must have revealed to him much for what he was preparing the way, extravagant as his view might have looked to others.

General Brush was born at Vergennes, Vermont, in 1813, and in 1820 moved with his parents to Illinois. In 1836 he married Miss Julia Etherton, of Jackson county, and in 1852 they moved into the county from their former home and took up their new residence in a small settlement which had not then a name, but which subsequently, through his enterprise, became Carbondale and received its geographical baptism from him. He and ten other men acquired the land on which the city now stands, and, after due deliberation, determined to lay out a town on it.

Being a strong temperance man, Mr. Brush, for he was not then a general, had incorporated in each contract for the sale of a town lot a provision forbidding the traffic in intoxicating liquors as a condition of the sale. He also looked after the moral and religious welfare of the town in another important respect, by making provision for four churches and setting aside a lot for each of them when he laid out the village he was starting as the nucleus of the city he hoped would follow.

In 1856 he was chosen trustee and a member of the building committee for the erection of a Presbyterian church. The facilities for building were meager and the structure was not completed until 1859, but it was dedicated on July 12 of that year. On December 18, following, he was elected ruling elder of the congregation. Thus was started in motion the beneficent force that has resulted in the present large congregation of the Presbyterian sect in the city and the splendid church edifice which it uses.

Up to this time his work in connection with his bantling was one of peace and progress only. But the time was near at hand when he would be called to sterner duties and take the flower of the community with him. When the Civil war began the whole of his following was against the partition of the Union, and he raised a company of volunteers in and around Carbondale to assist in defending it against this disaster. This became Company K, Eighteenth Illinois Volunteer Infantry, and he was chosen captain of it by the united voice of its members.

The command was soon at the front and engaged in active hostilities, although it was formed in response to the first call of President Lincoln for volunteers. At the battle of Fort Donelson in 1862, Captain Brush received a rather serious wound which disabled him for service for a time. On his recovery and return to the company he was promoted major for his bravery in the engagement. At the battle of Shiloh he commanded the regiment and received another wound. He recovered from this, however, in time to take part in the battle of Little Rock, Arkansas. In 1863 he resigned from the army, and was discharged with the rank of brevet brigadier general.

When he left the military service he returned to Carbondale, and thereafter served Jackson county for a number of years as county and circuit clerk. In 1867 his wife died, and in 1868 he married a second time, being united in New York on this occasion with Miss Elizabeth Ward, a Carbondale lady, with whom he lived in domestic happiness until 1879, when he was killed by a falling tree in the yard of his home. General Brush did more for Carbondale than any other one man. He was a merchant and helped to give the town mercantile importance. He also dealt extensively in land, and in this way aided greatly in developing and improving the surrounding country. He was an earnest advocate of everything that was good and was universally beloved.