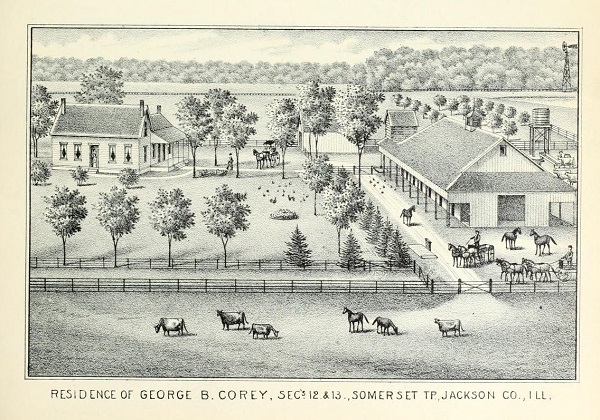 GEORGE B. COREY Through the good management of his farming affairs in general, the subject of this sketch has demonstrated the fact that skill and labor combined produce the best results. He is the owner of about four hundred acres in Jackson County, and makes his home on section 13, Somerset Township, where he has resided for many years. As an agriculturist and business man, he stands high in the confidence of the people, whose regard he has won by honorable dealings and genial courtesy.

The parents of our subject, Levi and Sarah (Gross) Corey, were natives of Massachusetts, and the latter, tradition says, was a descendant of French ancestors. Grandfather Gross assisted in the construction of the American ship known as "Ironsides." For several generations the Corey family resided in Massachusetts, where they became well and favorably known as patriotic and loyal citizens. Two of that name fought in the Revolutionary War, one being killed at Bunker Hill, where the other gallantly led his troops as Captain. Another uncle of our subject, Asel Corey, participated in the War of 1812.

The subject of this sketch was born in Worcester County, Mass., August 10, 1831, and was reared to manhood in the place of his birth. At the age of sixteen he commenced to learn the drug business, which he followed for several years. Educated in the common and high schools, he has supplemented the knowledge there obtained by extensive reading, and is now a well-informed man, posted upon all general topics of interest. In 1857 he came to Illinois, locating in Jackson County, and two years later purchased his present farm, then situated in the midst of a dense forest. Forty acres had been partially cleared, and to the clearing and cultivation of the remainder of the tract lie gave his time for many years. His first home was a frame house containing two rooms, to which he has since added until he now occupies a pleasant and commodious residence.

August 1, 1862, the name of George B. Corey was enrolled as a member of Company K, Seventy-third Illinois Infantry, which became a part of the Army of the Cumberland. With his regiment he fought in numerous engagements, including those of Perryville and Stone River. At the latter place he was severely injured, and is now in receipt of a pension of $12 per month. At the close of the war he was honorably discharged, June 30, 1865, and returning to Illinois, took np the pursuits of peace. His career as a soldier was one of which he may well be proud. Enlisting as a private, he afterward served as Fourth Sergeant of his company, and for a time filled the position of Hospital Steward at Nashville, Tenn. He was instrumental in the organization of Worthen Post No. 128, G. A. R., of which he was Commander for three years.

The lady who, February 28, 1861, became the wife of George B. Corey bore the maiden name of Rebecca Friedline, and was born in Somerset County, Pa., April 22, 1842. Her parents, Daniel and Rachel Friedline, natives of Pennsylvania, are now deceased. To our subject and his wife there have been born three children: Addie V., who is the wife of G. H. Will, a resident of De Soto Township; Kate D., the wife of Frank G. Proeunier, of Chicago; and Sarah L. G. Mrs. Corey is identified with the Lutheran Church, and is a devoted Christian lady.

In politics a stanch advocate of Republican principles, Mr. Corey has been elected on the ticket of that party to numerous positions of influence and honor. He served as Highway Commissioner and Clerk of Somerset Township, and in 1890 filled the position of United States Census Commissioner of this township. As a citizen he gives his support to all measures for the benefit of the community, and is a man who occupies a high place in the regard of all who know him.