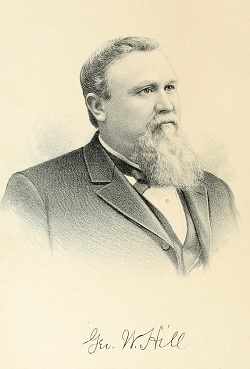 HON. GEORGE W. HILL, of Illinois, is the senior member of the firm of Hill & Martin, the most prominent and widely known law firm of southern Illinois. Their office is located at Murphysboro, but their business extends over a wide range of territory. Mr. Hill is recognized as the most influential citizen of Jackson County. As a lawyer, he is logical, a quick reasoner, a man of keen perceptions and an able advocate. Born near Benton, Franklin County, Ill., October 31, 1847, Mr. Hill has been throughout his life identified with the history of this state. His grandfather, Richard Hill, was one of the leading men of Virginia. In an early day he moved to Illinois, and by team and wagon went to what is now Franklin County, Ill. In a log cabin he began life in true pioneer style, and there made his home until his death. He served in the State Legislature of Virginia as a man of considerable prominence.

Judge John W. Hill, father of our subject, was born and reared in Franklin County, and was a self-made man. He followed farming throughout the greater part of his life and became the owner of six hundred acres of land, of which five hundred are under cultivation. A great lover of hunting, in the early days he shot many deer, bears, wolves, etc. One of his most prominent traits was hospitality, and visitors to his home always received a hearty welcome. He served both as Treasurer and Judge of Franklin County, and was a prominent worker in the ranks of the Democratic party. He was a stockholder in, and one of the Trustees of Ewing College, and served as its Treasurer from its foundation until his death. In religious belief he was a Baptist, and served as Deacon of the church. He died July 21, 1876, at the age of fifty-four. His wife, who bore the maiden name of Margaret Beattie, was born in Alabama, and was of Irish descent. Her father became one of the pioneers of Franklin County, Ill. Her death occurred at the home of her son, Richard, near Mt. Vernon, Ill., in 1892, at the age of seventy years.

In the Hill family were eight sons and two daughters: Richard, a farmer of Mt. Vernon; James, who served in the late war, and now follows farming near Benton; Isaac, an agriculturist of Jefferson County, Ill.; George W., of this sketch; John W., a farmer of Franklin County; Charles M., who follows the same pursuit in Union County; Robert, a farmer of Franklin County; Andrew J., a farmer, who is living on the old homestead; Mrs. Nancy Gourley and Mrs. Margaret Gourley, both of whom live in Union County.

Mr. Hill whose name heads this record attended the common schools and the Ewing High School, and in 1869 entered McKendree College, at Lebanon, Ill., from which institution he was graduated in 1872. He afterward received the degree of A. M., and subsequently that of LL. B. was conferred upon him. After Ewing High School became Ewing College, he was elected Professor of Sciences and Latin, and held the chair for one year. He then came to Murphysboro to practice law, but upon the solicitation of the old Superintendent and others at this place, he served as Principal of the public schools for one year. On the expiration of that period, he entered upon the work of the legal profession, and was alone until 1881, when the firm of Hill & Martin was formed. He has an extensive library and is well versed upon matters generally.

On the 27th of October, 1875, Mr. Hill wedded Fannie, eldest daughter of Col. W. T. Ingram, M. D., a native of Tennessee, and now a leading physician of Murphysboro, Ill. They are the parents of five living children: Margaret, William C., Fannie, Helen and Ruth. The mother is a member of the Methodist Episcopal Church, and takes a very active part in religious and charitable work, as well as a deep interest in her intelligent family and beautiful home.

The political record of Mr. Hill has also brought him honor and won him prominence. In the fall of 1884 he was elected State Senator from the Fiftieth District, and served for four years in the Thirty-seventh and Thirty-eighth General Assemblies. He introduced several important bills and was a member of a number of leading committees. His bill providing fire escapes for all tall public buildings in Illinois was passed, also the one to protect the claims of laborers. His bill concerning receivers was also passed, as was that for rebuilding the Southern Illinois Normal School at Carbondale, and others of importance. Mr. Hill always labored in the interest of his constituents, and proved a leading and influential member of the Senate. When his term had expired, he refused a re-nomination. He has never sought office, preferring to follow his law practice and be at home with his family.

Various interests have occupied the attention of our subject. He was one of the organizers and is a stockholder in the City National Bank. He was Vice-President of the water works and electric light company, of which he was one of the incorporators, and is President of the Jackson County Abstract and Title Guarantee Company. He is also a stockholder in the building and loan association. His work along business lines has materially advanced the interests of the city and county and promoted their growth and upbuilding. His time and attention have been largely given to the interests that were calculated to advance the general welfare of the town, county and state, and the community could ill afford to lose so valuable a citizen. He has long been Chairman of the County Central Committee of the Democratic party and was a delegate to the national convention which met in St. Louis in 1888 and nominated Grover Cleveland for the Presidency. Socially, he is a prominent Mason, and is Past Grand Master Workman of the Illinois Ancient Order of United Workmen. He is also connected with the Odd Fellows.