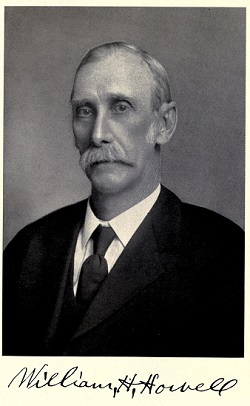 William H. Howell was born in Monongalia county, West Virginia, on the 4th day of May, 1845. He is the son of George and Mary Howell. His great-grandfather, Samuel Howell, immigrated from England to Maryland, and his grandparents, Annie and Laban Howell, came from Maryland into West Virginia.

William H. Howell's father, George Howell, was one of seven sons, good old English stock. His father died when he was only three years old and his mother married again two years later, which caused William to live with his grandfather Howell until he was sixteen years old. In March, 1862, he came west to Carbondale, Illinois, and there learned fine carpentering and soon became a contractor. In 1869 he went to Kansas and during the boom in that, state he carried on an extensive contracting business.

He afterwards returned to Marion, Illinois, and went into the mercantile business, remaining there eight years. From there he moved in 1879 to Harrisburg, Illinois, and was a partner of Robert Micks in the dry goods business for one year. In 1880 he formed a partnership with Jack Davenport, William Alsopp and E. 0. Roberts, and went into the coal business under the firm name of the Cliffton Coal Company, operating a coal mine known as the Cliffton mine, which they operated very successfully together for two years. At the end of that time William H. Howell bought out two of his partners, which gave him 75% of the business. In two years he bought out his remaining partner and continued in the business alone, in which he was particularly successful. In 1892 he leased his coal mine to Davenport & White for a term of five years, and upon the termination of their lease he incorporated a new company known as the Cliffton Coal Company and sunk a shaft to No. 5 vein of coal, retaining a controlling interest in the new company and leasing his property to the new company on a royalty basis. Under the management of Mr. Howell this arrangement was a very profitable one.

Two weeks after selling his coal mine and coal lands Mr. Howell found himself out of a business. He began to get restless, his time heretofore having always been employed by his various business interests, and he began to prospect about for a new business. His attention became centered upon Vincennes, Indiana, and there he purchased three acres of land, well nigh the center of the city, with a view to starting a factory to manufacture corrugated paper, single and double faced board, and manufacturing it into boxes of all sizes for shipping cases, taking the place of wood.

In June, 1906, this firm was incorporated as the W. H. Howell Manufacturing Company, of Vincennes, Indiana, with a capital stock of eighty thousand dollars. William H. Howell is president and general manager and owns a controlling interest in the business. Thus far the new concern has done business at a profit, and Mr. Howell is firm in his opinion that the industry has a great future. He manifests a great deal of pardonable pride in the success it has achieved thus far, and it is not too much to say that that success is for the most part due to the splendid management of Mr. Howell as president of the concern and its general manager. He still retains his beautiful home in Harrisburg, Illinois, where he lives, going and coming each week from there to the factory in Vincennes.

On September 15, 1874, Mr. Howell was married to Mary M. Mitchell, at Grayville, White county, Illinois. She is the daughter of M. P. and C. W. Mitchell. The father, Mardonius Paterson Mitchell, was the second son of Sion Hunt and Elizabeth (Cook) Mitchell. He was born in Williamson county, April 19, 1821. His father, Sion Hunt Mitchell, was the third son of William and Elizabeth (Hunt) Mitchell, and he was born in Franklin county, North Carolina, September 13, 1797. He was one of a family of eleven children, and his father was William Mitchell, son of John Mitchell, who lived at Whitehall, Lincoln county, England, and was knighted some time in the eighteenth century. William Mitchell married Elizabeth N. Hunt, March 3, 1790. She was born at White Hall, Lincoln county, December 18, 1771. Lord Hunt, the great-great-grandfather of Mary M. (Mitchell) Howell, was famous by reason of his leadership in the Hunt rebellion.

One daughter, Lelle Mitchell Howell, was born to Mr. and Mrs. William H. Howell. She was born at Marion, Illinois, on the 21st of July, 1878. She married J. M. Pruett at Harrisburg, Illinois, April 25, 1900, and to them one son has been born, John Howell Pruett, born August 21, 1902. The Pruett family also reside in Harrisburg, Illinois.

William H. Howell is a thirty -second degree Mason and an old school Presbyterian. He is a past master of Harrisburg Lodge, No. 325, and is vice president and a member of the directorate of the First National Bank of Harrisburg. He has achieved a worthy measure of success because of his exceptional ability to make the most of every business opportunity, and throughout his life all his dealings have been open and above board.

As citizens the character of himself and his wife is without blemish, and sucft men and women cannot fail to advance the best interests of the communities with which they become identified, and the precept and example of their lives is one that the present generation would do well to emulate.