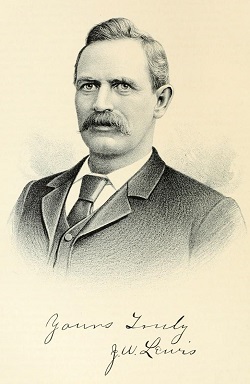 JOHN W. LEWIS, who occupies the responsible position of master mechanic of the Chicago & Texas Railroad, claims Pennsylvania as the state of his nativity. Born in Minersville, Schuylkill County, October 24, 1843, he is a son of William H. and Martha (Matthews) Lewis, both of whom were natives of Wales and were there married. Shortly after their union they moved to Schuylkill County, Pa., where the father engaged in mining. Later he removed to Luzerne County, Pa., and became Superintendent and foreman of the coal mines of that region. He died in 1881, at the advanced age of eighty-four. His wife died when our subject was quite young. They were the parents of four children, of whom three are now living.

The subject of this record was reared in Hazleton, Luzerne County, acquired his education in the common schools, and assisted his father as foreman of the mines. He later served an apprenticeship as a machinist, but in 1861, when the war broke out, he abandoned the pursuits of peace to aid his country in the struggle for the preservation of the Union. He joined Company N, Twenty-eighth Pennsylvania Infantry, was mustered in at Philadelphia and assigned to the Army of the Potomac. The regiment numbered twenty companies, and participated in the battles of Antietam, Chancellorsville, Gettysburg and others.

Later, Company N was transferred, becoming Company C, One Hundred and Forty-seventh Pennsylvania Infantry, and was sent to Tennessee under General Hooker. They then took part in the battles of Lookout Mountain, Missionary Ridge and Ringgold, Ga., and went into winter quarters at Wauhatchie Valley. Mr. Lewis there veteranized and went home on a thirty days' furlough. When his time had expired he rejoined his command, and participated in the engagements at Resaca, Dallas, Peach Tree Creek, Snake Creek Gap, Buzzard's Roost, Kenesaw Mountain, the siege of Atlanta, the celebrated march to the sea, and then through the Carolinas. He took part in the battle of Goldsboro, witnessed the surrender of Johnston at Raleigh, went on the forced march to Washington, D. C, and participated in the Grand Review in the Capitol City. He was then honorably discharged, after three years and eleven months of faithful and arduous service.

Returning home, Mr. Lewis continued to work in the machine shop for about a year, and then in 1866 emigrated to Clinton County, Iowa, where he worked at locomotive building in the shops of the Chicago it Northwestern Railroad three years. The succeeding four years were passed as a machinist in the shops of the Chicago, Rock Island & Pacific Railroad, at Rock Island, Ill., after which he went to Rapids City, Ill., where he put up the machinery at a mine. He then became Superintendent of the mine, serving as such until the spring of 1879, at which time he came to Murphysboro as machinist for the Carbondale Coal Railroad, now the Cairo Short Line. He remained in the shops at Harrison during their continuance at that place, and in 1883 became a machinist of Grand Tower. In 1886 he was promoted to the position of master mechanic of the Chicago & Texas Railroad at Murphysboro. He has the entire supervision of all the mechanical work, there being some thirty hands employed in the machine shop, car shop, paint shop and boiler shop. They rebuild their own locomotives. The shops have been greatly improved since Mr. Lewis took charge, and the work in the various departments is admirably conducted.

Our subject was first married in York County, Pa., his wife being Miss Mary Bowen, a native of that place. She died in Jackson County, leaving three children: Mrs. Ella Jeffry, of Peoria, Ill.; and William and John, who are firemen on the Chicago & Texas Railroad. For his second wife Mr. Lewis chose Miss Eliza Francis, a native of England. They have one son, Philip. The lady is a member of the Methodist Episcopal Church. Socially, Mr. Lewis is connected with the Masonic lodge of Port Byron, Ill., and the Royal Arch chapter of Murphysboro. In politics he is a Republican.

The parents of Mrs. Lewis, Elisha and Emma (Hancock) Francis, were natives of England, and came to America in 1849, when their daughter Eliza was but one year old. For twelve months they remained in New Jersey, after which they moved to Grant County, Wis., and there resided until 1865. Later they spent three and one-half years in Hardin County, Ill., and from there came to Murphysboro, Ill. In 1874 the father was thrown from a load of corn and killed. The mother still survives, and makes her home in Murphysboro. They had a family of seven children, of whom three are now living: Mrs. Lewis, Elijah and Emily.