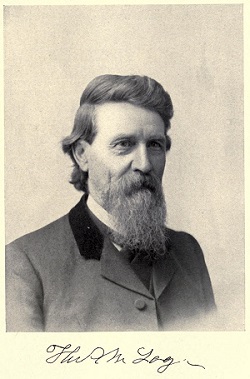 It is a generally accepted truism that no man of genius or acknowledged ability can be justly or adequately judged on the morrow of his death, chiefly because time is needed to ripen the estimate upon work which can only be viewed on all sides in the calm atmosphere of a more or less remote period from its completion. This remark is in no sense inappropriate in the case of the late Thomas M. Logan, who occupies a conspicuous place in the history of Jackson county. No man in the community had warmer friends than he, or was more generally esteemed. He was a man of refined manners, of consummate business ability, one who achieved eminent success in his affairs. Mr. Logan was born August 1, 1828, a son of Dr. John and Elizabeth Logan, and a brother of the famous soldier and statesman, General John A. Logan, one of Illinois' most honored sons.

Mr. Logan's grandfather, John Logan, brought the family to the United States from Ireland, and for four years Dr. John Logan studied medicine in the South, his first field of practice being in Perry county, Missouri. In 1824 he located at Brownsville, then the county seat of Jackson county, Illinois. He married Mary Barcune, of Cape Girardeau county. Her father kept a store at the mouth of Apple Creek and sent his daughter away to a French and English school, so she was well educated and she was also a handsome woman. She was the widow of one Lorimer, and one child was born, Louisa. The mother died, and several years later Mr. Logan moved to Illinois, and here he married for his second wife Elizabeth Jenkins, a native of North Carolina, whose father removed from that state to South Carolina and later to Tennessee, and subsequently came to Union county, Illinois, where he spent the remainder of his life in farming. Mr. Jenkins raised a company during the Black Hawk war, later becoming the colonel of his regiment, and his son served the state as lieutenant governor. In 1826 Dr. John Logan removed to what is now Murphysboro, buying a tract of one hundred and sixty acres of land, and in 1842, when the county commissioners chose a part of that farm for the site of the new court house, he readily donated a large portion of his land, on which the square and court house are now located. The original Logan home, which was erected by him, was remodeled, the same logs being used in rebuilding, and this homestead is located on South Eighteenth street. During the Black Hawk war Dr. Logan offered his services to his country, and throughout that struggle served as a surgeon. A prominent member of the Illinois medical profession, he was also interested in public matters, and rose to positions of honor and trust, being several times sent to the legislature. He passed away in 1853, and his widow survived him until 1876, when she passed away. Both were earnest members of the Methodist Episcopal church, South.

Thomas M. Logan was educated in the public schools, and was reared to the life of an agriculturist, eventually becoming the owner of three hundred acres of fine land, which he devoted to general farming and the breeding of fine cattle and thoroughbred horses. In 1892, with J. C. Clarke, he laid out the Clarke & Logan addition to Murphysboro, a tract of eighty acres, and eventually became the organizer and director of the First National and City National banks, and with John Ozburn built the manufacturing mill and the Logan & Deshon mill. Actively interested in all of his city's interests, he became president of the Murphysboro Street Railway Company, and held that position up to the time of his death. In 1891 he bought the site of the present Logan home, which cost in the neighborhood of thirty-five thousand dollars. There his widow, who was Miss Sallie Oliver, of Lecompton, Kansas, now resides.

As an intelligent man and reader, Mr. Logan was always well versed in the current events and affairs of the day, whether from an educational or political standpoint. While his strong self-reliance required him to adhere with tenacity to those views which his judgment and investigation led him to adopt, his sincerity was undoubted, and his integrity was unquestioned. Holding the warmest place in the hearts of those who knew him best whether at the home fireside or in the circle of friendship his life and character were a tower of strength, and his memory shall be a benediction to those who loved him so well, He passed away at his home in Murphysboro on the 26th of June, 1907.