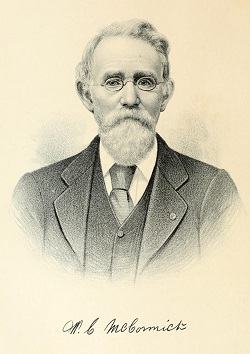 WILLIAM C. McCORMICK, who resides on section 21, Kinkaid Township, is recognized as one of the leading and progressive farmers of Jackson County, and it is with pleasure that we present to our readers this record of his life. Born in the neighboring state of Indiana, on the 2d of August, 1832, he is a son of Alfred G. McCormick, who was born in Lafayette County, Pa., in 1795. On the paternal side he was of Irish descent, and on the maternal side was of Pennsylvania-German lineage.

In the Keystone State Alfred McCormick was first married, and by that union had two children: David, who died in childhood; and Hanna, who was married in Chester, Ill., to Philip Meyers and is now living near Los Angeles, Cal. They have seven children: Thomas, Cyrus, Charles, Zeb, Ada, Anna and Frank. Mr. McCormick was married in Indiana about 1830 to Frances Cornelius, and in 1837 took his family to Randolph County, where he lived on a farm until 1855. In that year he came to Jackson County and made a permanent location in Kinkaid Township. He taught school until his eldest sons were large enough to carry on the farm. He was also a tailor and cigar maker, and in the first named vocation he met with most excellent success. In politics he voted with the Democracy until 1860, when he supported Lincoln, and thereafter continued his allegiance to the Republican party. He was a fine scholar, especially proficient in arithmetic, and was an expert penman. His wife was a faithful member of the Free Will Baptist Church from her thirteenth year, and died in that faith in May, 1886. In their family were nine children: Sarah A., who died at the age of eighteen; our subject; Christian L., a store keeper of Polk County, Ill.; Alfred G., who died during the late war, in August, 1862, near Huntsville, Ala.; Jane, wife of Nathan Ash, who died in Franklin County, Ill.; Virginia, wife of Thomas Gray, of Randolph County; Maria, wife of Dr. Joel Barber, a physician of Rockwood, Ill.; Theodocia, wife of Alexander Barber, of Rockwood, and George W., of Kinkaid Township. 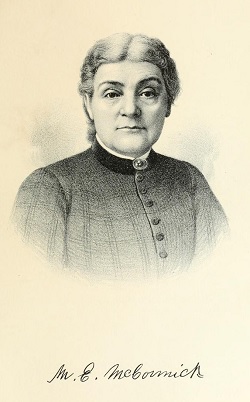 William C. McCormick continued to live with his parents and aid in their support until twenty-three years of age, when he purchased a farm of one hundred acres on section 29, Kinkaid Township, beginning the cultivation of the same. As a companion and helpmate on life's journey he chose Martha E. Talbott, the wedding being celebrated January 14, 1858. They lived on his first farm until 1874, when they removed to the one on which they now reside. A great transformation has taken place since that time — the land has been placed under a high state of cultivation and many excellent improvements made. He how has an elegant home and all the necessary buildings and conveniences of a model farm, and two hundred and forty and a-half acres of rich land yield to him a golden tribute.

In politics Mr. McCormick has been a stanch Republican for many years, but now votes with the Prohibition party. He and his wife have for twenty-six years been prominent members of and active workers in the Free Will Baptist Church. He has served as Deacon, and for twenty years was Sunday-school Superintendent, and his wife has for many years been Clerk of the church. When he joined the army he united with the Union Church of his regiment. Mr. McCormick enlisted as a private for the late war in August, 1862, as a member of Company A, Eightieth Illinois Infantry, under Capt. Luther Mann and Col. Thomas Allen. He continued in the service for almost three years and was Corporal of his company. At the siege of Atlanta, August 20, 1864, he was seriously wounded and was not again in active service, but was not discharged until his regiment was mustered out. He received a gunshot wound in the top of his head, the ball crushing the skull and piercing the brain. For weeks it was thought he could not recover, but at length his vigorous constitution triumphed. Since his return from the war, he has devoted his energies untiringly to farm work and has thereby acquired a handsome competence. Socially, he is a member of the Masonic fraternity of Ava, of which he is now Chaplain. He is a charter member of the Knights of Honor, in which he is also Chaplain, and is a charter member of Ava Post, G. A. R.