Biography - A. B. Minton 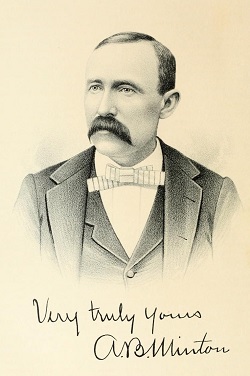 A. B. MINTON, master mechanic of the Mobile & Ohio Railroad at Murphysboro, claims Virginia as the state of his nativity. He was born near Max Meadows, Wythe County, October 12, 1852, and is a son of E. H. and Mary (Richey) Minton. The grandparents on both sides were natives of Virginia. The Mintons were of English descent. The maternal grandfather, E. B. Richey, was a farmer of Virginia, served in the War of 1812, and died in 1856.

The father of our subject was reared in the Buckeye State, and after his marriage located in Wythe County, Va. Later he removed to Charleston, Tenn., where he engaged in farming and general merchandising, continuing that business until the latter part of 1860. He then started for Indiana, in order to bring his old mother back to his home, but he never returned, for death overtook him, and he passed away in the Hoosier State February 12, 1861. He was a member of the Presbyterian Church, and his wife belonged to the Baptist Church. She died in Cleveland, Tenn., January 4, 1889, at the age of sixty-seven.

Our subject is their only child. He was reared in Tennessee from the age of six years, and was principally educated in private schools. In 1867 he entered the machine shops of the East Tennessee, Virginia & Georgia Railroad Company at Knoxville, where he served a three years' apprenticeship, continuing there until 1875. In 1870 he was made fireman, and after eighteen months became engineer, running between Bristol, Va., and Chattanooga, Tenn. In 1875 he went to Jackson, Tenn., and became foreman of the roundhouse and shops of the Illinois Central Railroad, remaining there until 1890.

In Cleveland, Tenn., February 2, 1875, Mr. Minton married Miss Mary McNelly, who was born and reared in that state. They have two children, Robert and Edward. Socially, he is connected with the Masonic fraternity as a Knight Templar Mason, and also belongs to the Ancient Order of United Workmen and the Modern Woodmen of America. In politics he is a supporter of the Democracy.

While in Jackson, Tenn., Mr. Minton was a member of the Brotherhood of Locomotive Engineers, and was Chief of the local department. He was also interested in real estate and in the building and loan association. In 1889 Mr. Clark, who was President of the Illinois Central Railroad, became President of the Mobile & Ohio, and by him Mr. Minton was solicited to become master mechanic of the St. Louis Division. He accepted, and in consequence came to Murphysboro. He has the entire charge of the mechanical department of this division, with about two hundred and fifty employes under him, including seventy-five men in the car-shops. There is also a roundhouse with ten stalls. His division of the road is from St. Louis to Cairo, one hundred and fifty miles.

Mr. Minton was one of the organizers and builders of the Murphysboro Street Railway, and is now one of its Directors and its Secretary. He aided in organizing the City National Bank, and is also one of its Directors. In 1893 he was elected Alderman from the Third Ward on the Democratic ticket, and is Chairman of the finance committee. He is a skilled and practical mechanic and engineer, and his excellent business and executive ability has won him his present important position, which he is filling with great credit. He is an accommodating and genial gentleman, and Murphysboro numbers him among her best citizens.