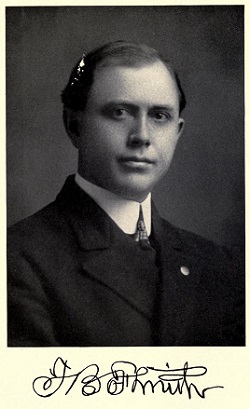 Farmer, educator, lawyer, lecturer and public official, Thomas B. F. Smith, of Carbondale, has proven his capacity and the worth of his citizenship in many lines of endeavor and been successful in them all, winning high credit and material advancement for himself and rendering valuable and appreciated service to the communities in which he has lived and the one in which he now resides. He is serving his third term as city attorney of Carbondale.

Mr. Smith is a Kentuckian by nativity, having been born in Lyon county in the Blue Grass state on May 12, 1877. His parents were William F. and Sarah (Nickell) Smith. They moved to Illinois in 1889 and located on a farm in Williamson county. On this farm the son grew to manhood and obtained the beginning of his academic education in the country school in the vicinity. He completed its course of instruction and supplemented that by diligent and reflective reading and study on his own account, and so prepared himself for the profession of teaching, in which he engaged for a few years. Then, feeling the need of more extensive knowledge and better training for the work, he attended the Southern Illinois Normal University, from which he was graduated in 1901.

After receiving his diploma he again taught school for a time, and while teaching began the study of law, which he continued in the law department of the University of Illinois, being graduated therefrom in 1905. He was admitted to the bar in February of that year, and at once began the practice of his profession. He had been well prepared for the contests of the legal forum by the knowledge of human nature he acquired during his five years' experience as a school teacher, two of which were passed by him as superintendent of the schools in Jonesboro. Union county, as well as the teacher of one, giving him complex duties and a wider range of vision.

In 1897 Mr. Smith moved to Carbondale, and since 1905 has been actively engaged in an extensive general practice. The people of Carbondale have shown their appreciation of his worth as a man, high character and usefulness as a citizen and ability as a lawyer by electing him city attorney three times in succession, and always with strong manifestations of general esteem and admiration. He is a zealous Republican in his political affiliations and one of the influential men of his party throughout Southern Illinois. His services to the party are always effective, his counsel in its campaigns is always good, and his popularity as a leader and campaigner is coextensive with his acquaintance in this part of the state, where he has long been prominent in all political consultations on his side of the great and perpetual line of battle.

In religious allegiance he is a Presbyterian and one of the deacons of the congregation in which he holds his membership. Fraternally he is a Freemason of the Royal Arch degree; a member of the Order of Elks; a Knight of Pythias with the rank of past chancellor commander; an Odd Fellow; and a Modern Woodman of America of high standing in the order. In it he is clerk of the camp- to which he belongs, and has frequently been its delegate to the meetings of the head camp. He is also in frequent demand as a lecturer on the tenets and purposes of the order, and is serving as its treasurer in this state, having held this office for the past three years. Socially he is connected with the Twenty-fifth District and the social clubs. In addition, he is a member of the Carbondale board of education.

On the 9th of September, 1903, he married Miss Bessie Johnson, a daughter James M. and Sarah A. (Harvey) Johnson, highly respected residents of Carbondale, where the marriage was solemnized. Mr. Smith is yet a young man, but by industry, thrift and determined perseverance he has already achieved a great deal in life. He has made his own way, without capital or other resources except his good health, resolute spirit and fine natural endowments; and the progress he has so far enjoyed and wrought out by his own efforts is an earnest of what he will yet accomplish in higher lines of usefulness if his life and health are spared. He has gained an advanced stepping-stone to a loftier range of duties and more extended usefulness, and he is of the caliber that never hesitates to take a step forward. The people of Jackson county regard him as one of their most serviceable citizens at present and one of their men of greatest promise for the future.