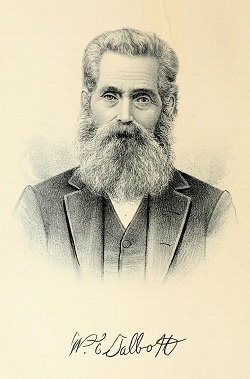 W. E. TALBOTT, who is now living a retired life in Ava, claims Tennessee as the state of his nativity, his birth having occurred in Smith County, April 20, 1817. The family is of English origin, and at an early day in Colonial history was established in Virginia, where Thomas Talbott, grandfather of our subject, was born. William R. Talbott, the father, was born near Fredericksburg, Va., in 1796, and served under General Harrison in the"War of 1812, taking part in the battles of the northwest. He also fought under General Jackson at New Orleans. Removing to Tennessee, he there married Martha M. Gifford, who was born near Knoxville in 1793.

In October, 1820, William R. Talbott and his wife came to Illinois, locating two miles north of Kaskaskia, and two years later removed to Kinkaid Township, Jackson County, leasing a farm from Captain McDonough, the pioneer mail carrier of this section. Later they located two miles north of Rockwood, Randolph County, but after four years they came to Kinkaid Township, settling on section 33, where they made a permanent location. Mr. Talbott died November 16, 1847, and his wife passed away April 12, 1841. Of their eight children but two are now living: W. E., and Martha M., wife of Samuel Bowers, a farmer of Kinkaid Township, by whom she has three children. The mother was a member of the Free Will Baptist Church, and the father was a Jacksonian Democrat.

Mr. Talbott of this sketch was only three years old when brought by his parents to Illinois. His mother carried a baby in her arms, and he rode behind her on horseback. In 1826 he entered the first school taught on the Mississippi River Bluff, and in his youth obtained such education as the schools of the neighborhood afforded, but his privileges were very meagre. At the age of sixteen he assumed the management of the farm, for his father was in poor health. He drove an ox-cart to mill at Steeleville, and experienced all the difficulties of pioneer life. For two years' service after attaining his majority his father gave him $200, with which he entered eighty acres of wild land on section 22, Kinkaid Township., and began the development of a farm.

On the 14th of January, 1841, Mr. Talbott married Elizabeth, daughter of 'Squire Crane, who was a territorial ranger and an early settler in this community. She was born in Kinkaid Township, June 7, 1820. They began their domestic life in a log cabin, but as the years passed, they were enabled to secure the comforts and conveniences of civilization, and theirs became one of the finest farms of the township. They made it their home until 1887, since which time they have lived retired in Ava. Mr. Talbott now owns fourteen hundred and seventy acres of land, and has given five hundred acres to his children.

In the family were twelve children, six of whom are yet living: Mrs. Martha M. McCormick, S. A., Thomas R., Peter K., William R. and Mrs. Sophrona J. Austin. All reside in Kinkaid Township. S. A. served in the Civil War, and was held prisoner for eighteen months. The children were given good educational advantages, and were thereby fitted for the practical duties of life.

In politics. Mr. Talbott has long been a Democrat. For ten years he served as Supervisor, and for many years has been School Director. He is the oldest living settler in Kinkaid Township, his residence in Illinois covering a period of seventy-four years. He has watched the entire growth and development of the county, has aided in its advancement, and well deserves mention among its honored pioneers.