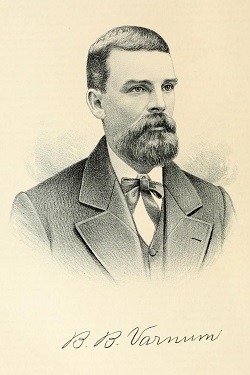 BENJAMIN BENNETT VARNUM. In naming the men of Jackson county who have been instrumental in building up their community, and have so conducted their affairs as to advance the best interests of their fellow citizens, prominent mention should be given to Benjamin Bennett Varnum, through whose long and honorable career the city of Ava and the surrounding country has benefited hugely, and in whose retirement this locality lost one of its most sterling business men, one who had indelibly left his mark upon the commercial history of Southern Illinois. Born on a farm in Monroe county, Illinois, December 16, 1841, Mr. Varnum is a son of Justice Bradley and Sarah Ann (Dixon) Varnum.

When Justice Varnum was only a. boy he removed with his parents from Belfast, Maine, where he had been born November 24, 1799, to Ohio, and there his father, Moses Varnum, engaged in farming in what was then the Northwest Territory. In 1818, when Illinois was admitted to the Union, Justice Varnum came to this state with his parents, locating in Monroe county, where the family remained for some time. After about six months spent in the southern states, in 1821, on a bear hunting expedition, Justice Varnum became connected with a trading company and went on a trip up the Yellowstone river to trade with the Indians. On his return he remained in Monroe county on his farm and also engaged in the coopering business. According to Mr. Varnum "he had a few more wild oats to sow," and with a party of' "forty-niners" he took the trip to California. Accumulating a considerable share of the precious metal, Justice Varnum returned to his family in 1851. and continued to live on his farm until his death, September 22, 1861. He was an accomplished violinist, and was a great favorite among those attending local gatherings of a social nature. He was first a Whig and later a Republican, but acted rather as an onlooker than as an office seeker. On October 31, 1830, Mr. Varnum was married to Miss Sarah Ann Dixon, of Jefferson county, Missouri, who was born December 31, 1808, and died April 4, 1882, and they were the parents of nine children, as follows: Virginia, who died in infancy; John Carlisle, born in 1833, who died in 1861; Christopher Columbus, born in 1835, who died in 1839; Austin Dixon, born in 1837; Horace Addison, born in 1839; Benjamin Bennett, born in 1841; Margaret Isabel, born in 1844, who died in 1845; Leverett Decatur, born in 1846; and Justin Frederick, born in 1849.

Benjamin Bennett Varnum 's early life was spent in Monroe county, Illinois, and his education secured in the subscription schools. He remained on his father's farm until he became of age, at which time he was married and established himself on a farm of his own in the same county. His wife was Sarah Ann Barker, born December 13, 1843, who died February 11, 1878, daughter of Lewis and Sarah (Tolin) Barker, of Waterloo, Illinois. Five children were born to this union, all of whom are now deceased: Eleanor Elsie, Carrie Lois, Laura Ethel, Olive Isabel and Justice Warren. In 1882 Mr. Varnum came to Ava, Illinois, and became in time one of the most prominent agriculturists of these parts, owning twelve hundred acres of valuable land. In 1907 he gave up agriculture to engage in the lumber business, in which he was extensively engaged for some time, and with which he is still largely interested, although now retired from business activities. Originally a Republican, Mr. Varnum changed his views during the administration of Rutherford B. Hayes, whose policy of keeping a standing army in the South did not meet with Mr. Varnum 's approval, and since that time his support has been given to the Democratic party. He has served two terms on the county board, and as a friend of the cause of education has done much, being at present president of the board of education. Fraternally he is connected with the Masonic order.

In 1880 Mr. Varnum was married to Miss Minnie Boedecker, of Waterloo, Illinois, daughter of Henry and Minnie (Spellmeyer) Boedecker, and nine children have been born to them: Floyd Leslie, Edwin Bennett, Grover, Horace Homer, James Addison, Blanchard Banks, Nelson Carlisle, Noah Claude and William Jewett, of whom Floyd L., Horace H., James A. and Nelson C. are deceased. In all movements calculated to be of benefit to his community Mr. Varnum has ever taken an active part, and his career has been such as to stamp him a worthy representative of an honored family that traces its ancestry back to the year 1635, and in which may be found names of note in the military, the professions and the various honorable vocations of life.