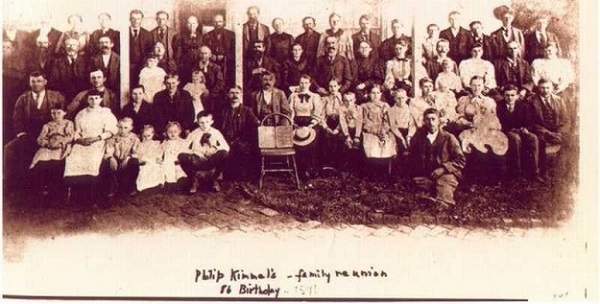 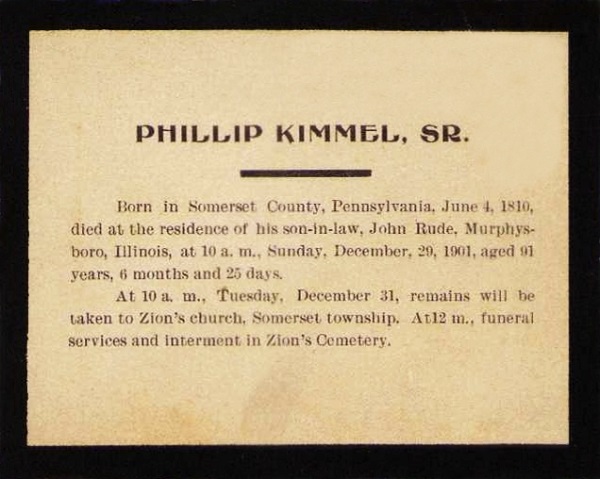 Well done thou good and faithful servant,
Enter thou into the joy of the Lord."

Philip Kimmel and his twin sister Sarah, were two of eight children of Abraham and Elizabeth Heiple Kimmel.

Philip Kimmel settled in Somerset Township, Jackson County, c.1841, becoming a landowner and farmer. It has been reported that at one time he owned one thousand acres. He became active in politics, and served in numerous official capacities. For three years he was Supervisor of Somerset Township as well as Treasurer of the township filling that position for twenty consecutive years. At one time, he served as a Commissioner of Jackson County Court, accounting for his being known as Judge Kimmel. For several years he was President of the Jackson County Agricultural Society and Joint Stock Association, being one of the charter members of that organization. He served two terms as County Superintendent of Schools.

Philip and Marty Gertrude Will Kimmel were active in the church community also. On page 48 of THE HISTORY OF JACKSON COUNTY 1878, Mrs. Mary Kimmel is listed as one of the original members of Zion Evangelical Lutheran Church, organized 1843. Further on page 50, Rev. A.L.Yount furnishes a history of the church, of which he was pastor. He writes "the persons who were the original members of Zion's church, only two survive, Mrs. Mary Kimmel, wife of Judge Kimmel, and John Will. I cannot close this sketch without a word of commendation of the noble service rendered Zion's church by Judge Phil. Kimmel, who united with the church under the Rev. Mr. Omstead, upward of thirty years ago. He has been an office bearer, has often represented the church in Synod as Lay delegate, and in keeping the house in order, and in the work of the Sunday school and seeing after the comfort of the minister's family. He stands the peer of his fellow-members. Soon the Master will say, 'Well done thou good and faithful servant, enter thou into the joy of the Lord.'