When Jackson county was created by act of the general assembly, January 10, 1816, it included just what it does today, except a strip several miles wide was cut off of the north side to add to Perry when that county was created in 1827. This county has the Mississippi for a boundary on the west some eighteen miles, and the Big Muddy river passes through it from northeast to southwest. The tributaries to these two rivers are themselves good sized creeks, so the county is well watered. The south side is in the region of the Ozarks and is very hilly, but the central and north side are slightly rolling. There are large areas of submerged lands along the Mississippi bottoms. The county is underlaid with a very fine quality of coal and the quantity is in abundance. There have been excellent forests, but many of them have disappeared before the onward march of the farmer and the hard lumber man.

Prior to 1800 there were no whites permanently settled in the limits of the present county. An old historian says the first whites crossed into Jackson county over Degognia Creek, the boundary on the northwest, to make maple sugar in the northwestern part of the county. Two men and their families, a Mr. Reed, and Emsly Jones, settled in the county in 1802. Jones killed Reed and was hanged in Kaskaskia. In 1805 or 1806, Wm. Boone moved from near Kaskaskia to the northwestern part of the county and settled near Degognia Creek. A family by the name of Brooks came they were friends of Boone.

As early as 1804 Henry Noble and Jesse Griggs settled on Big Muddy above where Murphysboro now stands. Others settled near, one a tailor, another a miller. The settlers began to arrive and by the war of 1812 there were enough people in the region of the Big Muddy to constitute a company of Rangers. Such a company was commanded by Capt. William Boone. There were 80 men and officers. The "big hill" near Grand Tower and the "devil's oven" were settled as early as 1807. William Boone moved from the northwest corner of the county to what was called the "Sand Ridge," just where Kinkaid Creek flows into Big Muddy, in 1806-7. Here the government had set aside a reservation for the Kaskaskia Indians and at that time there were about sixty camps or lodges on the reservation. A few settlers had cabins on the Big Muddy near the Williamson county line. Here they built a block house as early as 1811. 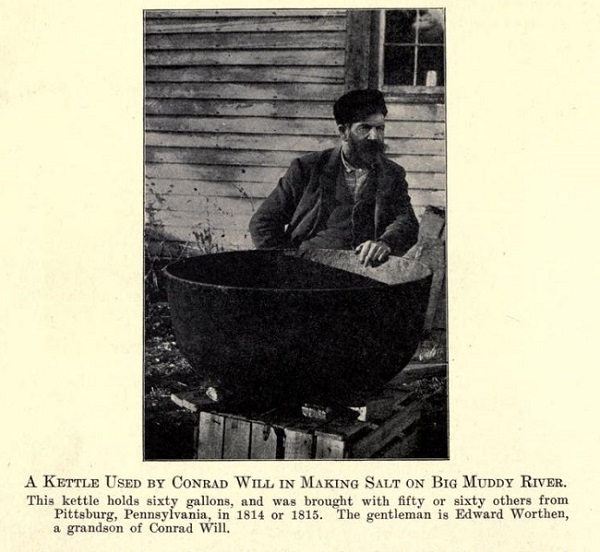 About 1813 Dr. Conrad Will came to this county. He discovered salt springs on the Big Muddy in 1814. He bought kettles in Pittsburgh and began the manufacture of salt in 1814 or 1815. Around these salt works grew up Old Brownsville, which was made the county seat in 1816. This remained the seat of justice till 1843, when the county seat was moved to Murphysboro. The site of Murphysboro had previously been settled by Dr. John Logan, father of Gen. John A. Logan. Conrad Will managed the salt works, owned a store, ran a tan yard, and practiced medicine, served in the legislature and assisted in the management of county affairs. Alexander Jenkins, a young man of promise, was a protege of Dr. Conrad Will. Wm. Boone built a flat boat at the mouth of Kinkaid Creek and made a trip to New Orleans in 1811. In 1814 the Duncans settled at the Big Hill, and the father, Joseph Duncan, built the finest house in the county. It stood near the river and just at the northwest corner of the Big Hill. It was called the "White House." 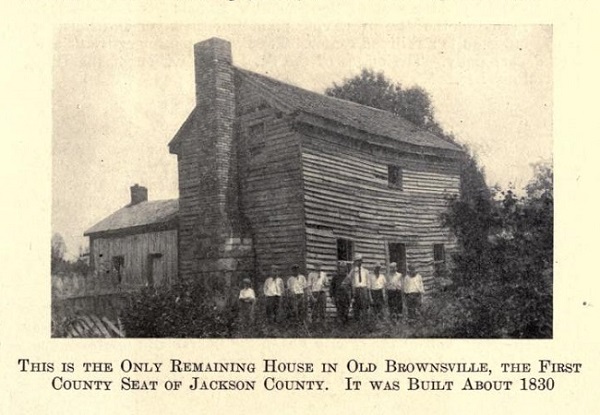 The eastern half of the county was not settled till late in the first half of the 19th century. The Illinois Central was finished in 1854. This brought many settlers, and towns sprang up. The early history is therefore confined to the section along the Big Muddy and the northwest which was close to Kaskaskia. Marcus Green Reynolds, now living a few miles south of Murphysboro, came to that region in 1832. He was from the Carolinas. Governor Barteme Reynolds, the first Royal governor of Georgia, was an ancestor of Mr. Marcus G. Reynolds. He came to this county when Indians were still on their reservation on the Sand Ridge. He remembers Alexander Jenkins, Conrad Will, Dr. Roberts, Peter Kimmel, Rev. Nail, Dr. John Logan, and other early settlers in or near Brownsville. He remembers the first steam mill in the county. He gives this recipe for the ink made in the early schools: Maple bark, copperas, indigo, sugar. Old Brownsville, he thinks, was a town of three or four hundred people; there was a bank, stores, hotel, tan yard, salt works, jail, and court house used for school and church purposes. Here is where Gen. John A. Logan went to school in the court house.

Another old settler still living is Wm. Green Williams. He came in 1832. He knew most of the people whom Mr. Reynolds knew. He was often in Old Brownsville and remembers well the removal of the county seat from Brownsville to Murphysboro in 1843. He now lives northwest of Carbondale two or three miles.

In 1852, the town of Carbondale was laid off on the newly built railroad the Illinois Central. The town was laid off by several men who were interested in the new venture. Among them were John Dougherty, Col. D. H. Brush, Asgill Connor, A. Buck, L. W. Ashley, J. P. Ashley, Wm. Richart and others. A clause in the original deeds to lots prohibited the sale of intoxicating liquors on any lot in Carbondale, but in after years the lawyers got their heads together and decided the restriction would not hold in the courts, and saloons were installed for a period of ten years, but for the past four years there have been no legalized saloons in the city.

Carbondale is the seat of the Southern Illinois State Normal University, contains the "tie preserving plant" of the Ayer and Lord company, and is quite a railroad center. Twenty-five passenger trains arrive and depart daily. The offices of the St. Louis division of the Illinois Central are here.

In a very early day, probably as early as 1830, coal was discovered on the Big Muddy. Large quantities were sent out of the Big Muddy on flat boats and barges. Coal has been a source of great revenue to this county, and is responsible for considerable railroad building. The quality and quantity, as has been said, is marked. Jackson and Williamson constitute the Tenth District under the mining laws of the state, and Jackson ranks 19th in production, putting out 621,853 tons in 1910. The report for 1911 shows 26 mines for this county, employing 1,184 men, 17 of them are what are called local mines.

Jackson was originally well timbered, but much of the better grades has been shipped out and only the second and third rate grades are left. The south half of the county lies in the Ozarks and immense quantities of fruits and vegetables are shipped from the railroad points. Pine rock quarries are to be found in this county at Grand Tower and at Bosky Dell.

Grand Tower on the Mississippi is an interesting river town. In about the year 1885 a railroad was built from Carbondale to Grand Tower. This connected with the Illinois Central at Carbondale, tapped the coal fields at Murphysboro and passed through the best timbered regions of the county. There were two iron furnaces at Grand Tower and extensive coke ovens at Murphysboro. The furnaces were abandoned about 1892 or earlier and the town suffered in consequence. Large rock quarries have been in operation in Grand Tower. The town had a population of 875 in 1910. The northwestern part of the county has two towns, Ava and Campbell Hill. Along the line of the Illinois Central, passing through Carbondale from south to north, are the towns of Makanda, a fruit shipping point, Bosky Dell, the site of extensive quarries, DeSoto and Elkville - coal stations and country towns.

Murphysboro, the county seat, is a city of over 7,000 people. It has several coal mines, the shops of the Mobile and Ohio railroad, and an extensive trade in groceries, dry goods, farm supplies, and lumber. There are five banks, an extensive shoe factory, foundries, and a paving brick plant that makes a very fine grade of paving blocks. The professions are fully represented. Here was the birthplace of Gen. John A. Logan and here some of his near kin live today. Murphysboro has many churches and the school interests are represented by an elegant township high school.